Feeling Christmassy yet? Here's my Levi's Xmas Window/Installation. As anyone whoever looks at this blog knows I'm not much of a writer, luckily Dazed digital have done a little article about it. Thank Goodness! -

“I wanted the place to evoke the feeling of childhood”, says set designer Gary Card of the giant denim polka dot maze that he has just installed in Levi’s Regent Street store’s window. The Christmas labyrinth that’s complete with intricate shelves, a small house and a set of denim elves is Card’s yet another venture into large-scale design, following a successful collaboration with London’s new retail concept LN-CC, and a series of installations in Loewe’s windows. Dazed sat him down for a little chat.

Dazed Digital: What was the concept behind the installation?
Gary Card: When we first discussed the collaboration, Levi’s said they wanted to create a Christmas display, but one that wouldn’t necessarily be shouting Christmas. That’s when the polka dot fabric first came into picture. It’s one of Levi’s signature prints this year and I love that it’s so reminiscent of snow! So we wanted to create something that would evoke childhood memories of searching and discovering, without having obvious symbols such as Santa or the Christmas tree. At the same time, we introduced elements such as the polka dots and denim elves, which are very reminiscent of Christmas.


DD: What kind of feelings were you hoping to provoke with the maze?
Gary Card: The idea of curiosity. A little bit of discovery. It should be charming, because charm is the main thing about Christmas, really. It also had to be cool. I love the idea of having a playground, because, again, it brings back those childhood memories. The treatment of colours was very important too. It would have been really easy to bring in colours such as the signature Levi’s red, but I wanted to keep it cold inside.

DD: Can you tell us a bit about the craftsmanship behind the installation?
Gary Card: I was very excited about working with the Levi's denim, I wanted to make a denim environment, I love material-led projects, ideas that are dictated and driven by one defining factor, I really like restriction in a brief, in a way it's easier to work with, worst thing in for me is a client saying, 'do whatever you like'. Denim is very hands-on and tactile, but also tough and resilient, perfect for stretching over the shapes, very much like making a canvas. I loved the colour too, it feels cold, totally fits the festive vibe.

DD: What was the most difficult aspect of planning and carrying out?
Gary Card: The most difficult part was managing the gallery space, how do make a set piece that the viewer can explore and hang out in without blocking the main walk ways into the store, that was very tricky. it's great for me if you get lost in my 'denim fun house' but not so great for Levi's if you get so lost you can't find the actual shop, so that was a very big consideration.

DD: Tell us something funny about the Christmas denim elves....
Gary Card: The funniest thing is coming up, we are going to be in the space making them during next week, doing a kind of denim elf making master class! 'elves making elves' I'm calling it - it's going to be hilarious...

DD: How would you describe the Levi's Christmas window?
Gary Card: It started life as a kind of 'bauhaus' concept, I was interested the relationship between very simple shapes and negative space, however it very quickly turned into a set for a mental kids TV show! But that was cool, I totally embraced that, it's supposed to be fun, at one point I really wanted to call it Polka Dot Playground, I think that's the essence of the project! 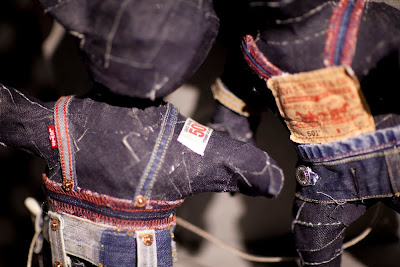 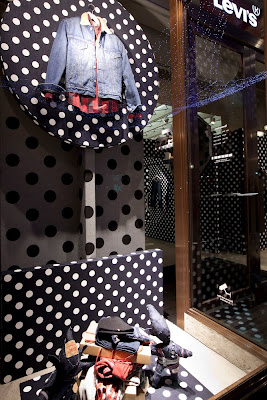 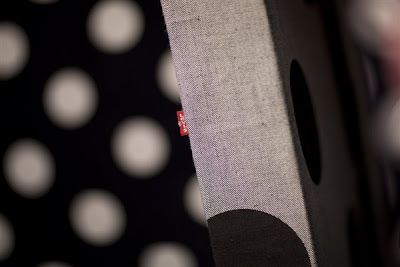 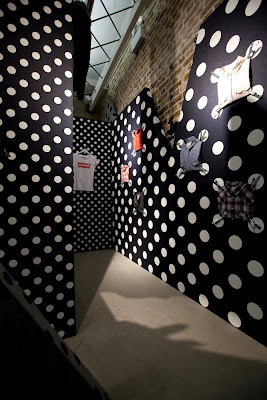 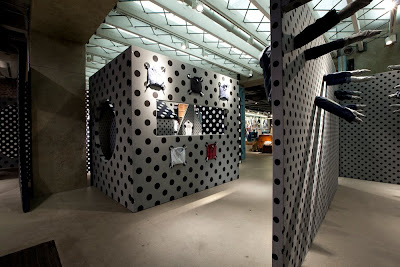 Special thanks to everyone who helped make this possible, Ollie Tiong for the all nighters and technical support, Russell Beck at Russell Beck Studios (http://www.russellbeckstudio.co.uk/) and his wonderful team for making it all happen, Jason Kyriacou at Levi's for being so amazing and flexible, my wonderful 'elves making elves' team, Penny Mill, Victoria Thomas Wood, Fan Hong, Harry Riley and Luke Abbey. See us in the Regent Street Store making denim elves in person Thuursday 2nd December!
Posted by Gary Card at 06:38